Our study researched bud rot, the gray mold called Botrtyis cinerea which grows on cannabis. Detailed analysis of the moldy buds showed a rapid progression of the fungus during the most humid settings. As part of our research, a team of advisors was hired to analyze the individual molecule structures of the bud rot causing Botrytis cinerea fungi. 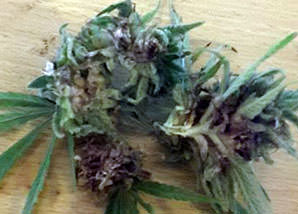 During a 9-week study, techniques to stop bud rot were used as a primary measure against mold spore reinfection. Important to the procedure was the eradication of Botrytis which was accomplished using such methods as lowering the relative humidity (RH), increasing air circulation, and pruning back plants to allow for more airflow in the canopy.

Botrytis cinerea was most frequently found in the inner areas of the dense buds present during flowering. Practicing regular inspection proved successful in preventing further gray mold outbreaks from occuring. Precautionary measures may be integrated into the cannabis cultivator's grow and harvest routine to increase the cleanliness and quality of the marijuana buds.

The results show an alarming mold susceptibility for most cannabis strains during the latter stages of the flowering cycle. Medical marijuana growers may consider precautions against mold infection, as well as familiarizing themselves with the techniques used to control bud rot in cannabis.