This article was first published on Help Lawyer and what it talks about is at the heart of the current Immigration problem in the usa. It also discusses how one may get help from a suitable Immigration Lawyer. There is always a solution to every problem and one must learn what rights you have as an immigrant.

Legal Help For The Illegal Immigrant 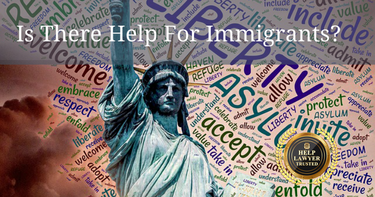 If you have entered the USA illegally and you now wish to work and/or settle here legally, you might need to speak to an immigration lawyer. Here is why.

Under the current presidency of Donald Trump, immigration policy is targeting the illegal immigrant. The Executive Order on Border Security and Immigration Enforcement Improvements signed on the 25th of January 2017, states that,

The purpose of this order is to direct executive departments and agencies (agencies) to deploy all lawful means to secure the Nation's southern border, to prevent further illegal immigration into the United States, and to repatriate illegal aliens swiftly, consistently, and humanely.

While the language uses the word 'humanely', be aware that this marks a shift in policy: if you are caught, you will have very little recourse available to you to make a case to stay. The following section from the Executive Order, is clear on that point.

Sec. 6.  Detention for Illegal Entry.  The Secretary shall immediately take all appropriate actions to ensure the detention of aliens apprehended for violations of immigration law pending the outcome of their removal proceedings or their removal from the country to the extent permitted by law.  The Secretary shall issue new policy guidance to all Department of Homeland Security personnel regarding the appropriate and consistent use of lawful detention authority under the INA, including the termination of the practice commonly known as "catch and release," whereby aliens are routinely released in the United States shortly after their apprehension for violations of immigration law.

According to the American Immigration Council, unauthorized immigrants who want to legalize their status are not able to simply 'get in line' like others who are here lawfully.

For those living legally in the USA, the immigration system is already highly complex. Indeed, here is a list of the main options:

Not all of these are available to the legal immigrant. And certainly, even fewer may be open to the illegal alien. And of the ones that are, without sound advice, they may as well not be: based on the way the system is built, and the current policy in place, it is highly unlikely that an illegal alien will find himself or herself able to navigate the system singlehandedly and win.

Another point to bear in mind is that certain categories have ceilings, so that even if you are eligible to apply for one options, the numbers may not be in your favor.

But while getting answers to how you can become a legal immigrant may be challenging, help is available.

Where to look for community support

If you are not in any of these areas however - and even if you are - contacting an immigration lawyer on your own is your best bet. Here is why.

What an immigration lawyer offers you

An immigration lawyer is an independent practitioner, which means that s/he is not connected to the U.S. immigration authorities. That being said, s/he will have an-depth understanding of how to navigate the U.S. immigration system through real-world experience and will be able to create a customized solution for you based on your particular circumstances, regardless of changes in the law.

If you need help, do not wait. Get help by calling an immigration lawyer today.