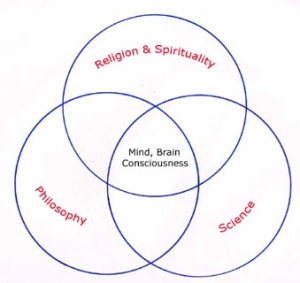 Venn Diagram
Through his poetry, Ralph Waldo Emerson explored spiritual, philosophical and scientific analyses of nature and man’s relationship to nature.  As father of the Transcendentalist movement, which regarded nature and people as inherently good, Emerson’s influence was vast.  Transcendentalists believed that society corrupted the individual; therefore, the movement placed an emphasis on the individual and not society.  The best way an individual could remedy the influence of a corrupt society was to become self-reliant.  Emerson believed nature exemplified the self-sufficiency that men lacked, though Emerson’s study of, and translation of, nature’s self-sufficiency and man’s ability to implement this self-sufficiency is contradictory.  Part of the contradiction lies in Emerson’s use of the word “nature.”  There are several prevalent scholarly voices that argue different perspectives about the meaning of “nature” in Emerson’s poems: spiritual, scientific, or philosophical.  As Emerson’s influence changed throughout his life, so did the meaning of the word “nature” in his works.

Literary critic George Woodberry disagrees with Wagenknecht’s assertion based on the poem “Blight.”  In “Blight,” Nature is the Great Mother that man aspires to reach and it is from nature that man has fallen. Woodberry argues that Nature gives man strength, but the strength does not come from God, but rather from man’s inner aspiration to achieve complete reconciliation with Nature and thus reach the level of the Great Mother.  In “Blight,” Emerson writes about “the coming of the ideal man, who shall achieve reconcilement and be himself equal to Nature” (Woodberry 170).  The opening lines to “Blight” are “Give me truths/For I am weary of the surfaces, / And die of inanition.”  The narrator desires the utmost truth, the core of what truth is, not simply a representation of truth. Furthermore, the narrator describes himself as “Of the round day, related to the sun, / And planted world, and full executor, / Of their imperfect functions.”  According to the Oxford English Dictionary, the word executor, is “one who executes or carries out a purpose” or “one who performs the duties” of someone else.  In the case of “Blight”’s narrator, he wants to perform the duties of Nature.
Wagenknecht disagrees with Woodberry, arguing that for Emerson the beauty of nature is created by God and mankind is to enjoy the beauty and see God’s work in nature, but mankind should not mistake nature for God.  Agreeing with Wagenknecht is author Robert Spiller, who states that Emerson used the word “nature” to mean “the spiritual uplifting of man” in which “God will show [Emerson]… where and how to live.” This attitude can be seen in “The Waterfall” and “Monadnoc” (Spiller 3).  In the poem “Monadnoc,” the narrator states that “Monadnoc is a mount strong…/ but well I know, no mountain can, Zion or Meru, measure with man” (Wagenknecht 55).  According to the OED, a Monadnoc is a “hill, mountain, or ridge or erosion-resistant rock rising about a peneplain.”  Zion is a hill where the city of David began and is where Jerusalem was first established.  Jerusalem is, biblically speaking, the place of God’s people.   The narrator is saying in “Monadnoc” that no matter the tallest hill that man may have, it is the hill that God has chosen which stands above the rest.  The narrator recognizes that there is beauty in other nature, but the height of beauty rests in God.
Emerson believed that everything consisted of Nature or the Soul.  Spiller notes that “all that is separate from us, all which Philosophy distinguishes as the NOT ME, that is, both nature and art, all other men and my own body, must be ranked under this name, NATURE” (8).  The soul for Emerson was the mind. According to theology, Nature is not what man is intended to strive towards.  God is the true epitome of truth and it is towards God that mankind is intended to strive .  Nature is the creation, not the creator, as Emerson implies.  But Emerson’s poems “Blight” and “Monadnoc” are a clear indication of Emerson breaking away from religion and into philosophy.  Wagenknecht notes that “in the Bible, nature fell along with man, but not in Emerson” (56). Emerson believed that since humans possess a higher form of Divinity within them in the form of free will, then mankind is in a unique position to distance himself from God.  Nature, on the other hand, is void of making decisions and thus unable to distance itself from God.  Since nature is under the “‘serene order’ or God’s self revelation, [nature] is ‘inviolable by’” humans (Wagenknecht 56).  Therefore, nature is closer to God than man is, which is why Emerson strove to find connection not only between God and man, but also between nature and man.
Again, Woodberry argues against Wagenknecht by asserting that for Emerson, “it is not that man has fallen off from God, but from Nature” (169).  According to Woodberry, Emerson held the view that there is opposition between man and nature and that “Nature is represented as the Great Mother and man as her child” (169).  Man is weak in comparison to nature, which is dominant and in control.  The opposition of man to nature is man’s atonement for the first sin by the Biblical figure Adam.  In Emerson’s poem “Woodnotes,” Woodberry finds evidence of Emerson moving away from the thought that mankind is separate from God, and instead theorizes that mankind is separate from nature.  In “Woodnotes” Emerson writes, “But the curtain doth not rise, /And Nature has miscarried wholly / Into Failure, into folly.” According to the OED, “miscarried” means “gone astray, not reaching or achieving the intended or desired end” (miscarried).  According to the poem, nature gave birth to mankind and not shortly after birth man was led astray into failure.  Since this great initial failure, mankind has been aspiring to attain the status of his parent, the Great Mother.
Finally, critic Gustaaf van Cromphout argues that for Emerson nature and mankind are “coworkers” of God. According to Cromphout, Emerson believed that intellect and knowledge were how man could best strive towards self-awareness and therefore hoist himself to the level of God’s coworker.  Emerson mentioned several times in his sermons that “men were called upon to be God’s coworkers in completing the creation” (Cromphout 144).  This belief led Emerson to theorize that “nature is God striving toward self-awareness, a condition that Nature achieves in humanity”: “Nature remains unconscious of its own striving until it reaches the point of human self-awareness.” According to Cromphout, “humans, in other words, [are] nature having risen to consciousness” (145).  This theory is in opposition to the Christian belief that men are in debt to God and are his joyful servants, not his coworkers.

Science
While the critics discussed above debate the relationship between nature and God in Emerson’s essays and poetry, there are some critics who are more concerned with Emerson’s scientific ideas. Author and literary critic Peter Obuchowski argues that Emerson’s poems endeavored to ascertain nature’s relationship to mankind via scientific analysis and discovery.  Obuchowski insists that for Emerson, “the whole problem of philosophy in relationship to science centered on the larger question of what relationship ‘poetic’ truth bore to scientific truth” (4).  Emerson couldn’t ignore the scientific discoveries that were happening during his time.  To do so would have limited his understanding of nature and the world in which he lived.  It is important to note that the men in Emerson’s time saw scientific knowledge as “cutting-edge versions of the ‘grandest’ human truths” (Ross 119).  Evolution didn’t apply only to species, but to the evolution of the mind.  As the Transcendentalist that he was, Emerson placed himself “at the forefront of the ‘human side’ of evolutionary theorizing” (Ross 120).
Literary critic William Rossi agrees with Obuchowski and proposes that Emerson considered “pursuing his inquiry through scientific theory… because the process of [scientific] professionalization was only then getting under way in England” (118).  Rossi states, “Emerson lived through a time when [nature’s] physical environment was extraordinarily transformed” and his theories were also evolving (101).  There was population growth as well as industrial and agricultural capitalism.  These emergences would have impacted the way in which Emerson lived, providing him access to modern luxury but also detaching him from the religious aspects of nature.  Emerson thus became “much more interested in the relationship between the natural world and the human mind than. . . in the natural world as proof of a designing deity” (Rossi 109).
Clearly, there are many different routes that Emerson took to ascertain man’s connection to nature: religion, philosophy and science.  Emerson didn’t settle on one explanation in his understanding and use of the word “nature” which is why, for many, studying Emerson’s poems and essays is frustrating.  Emerson’s contradictory explanations of man’s connection to nature have bothered literary critics for over one hundred and fifty years, and it is the challenge of defining Emerson’s view of nature that has invoked such a lively and interesting debate.


To return back to the Research Essay Home Page, please click here.